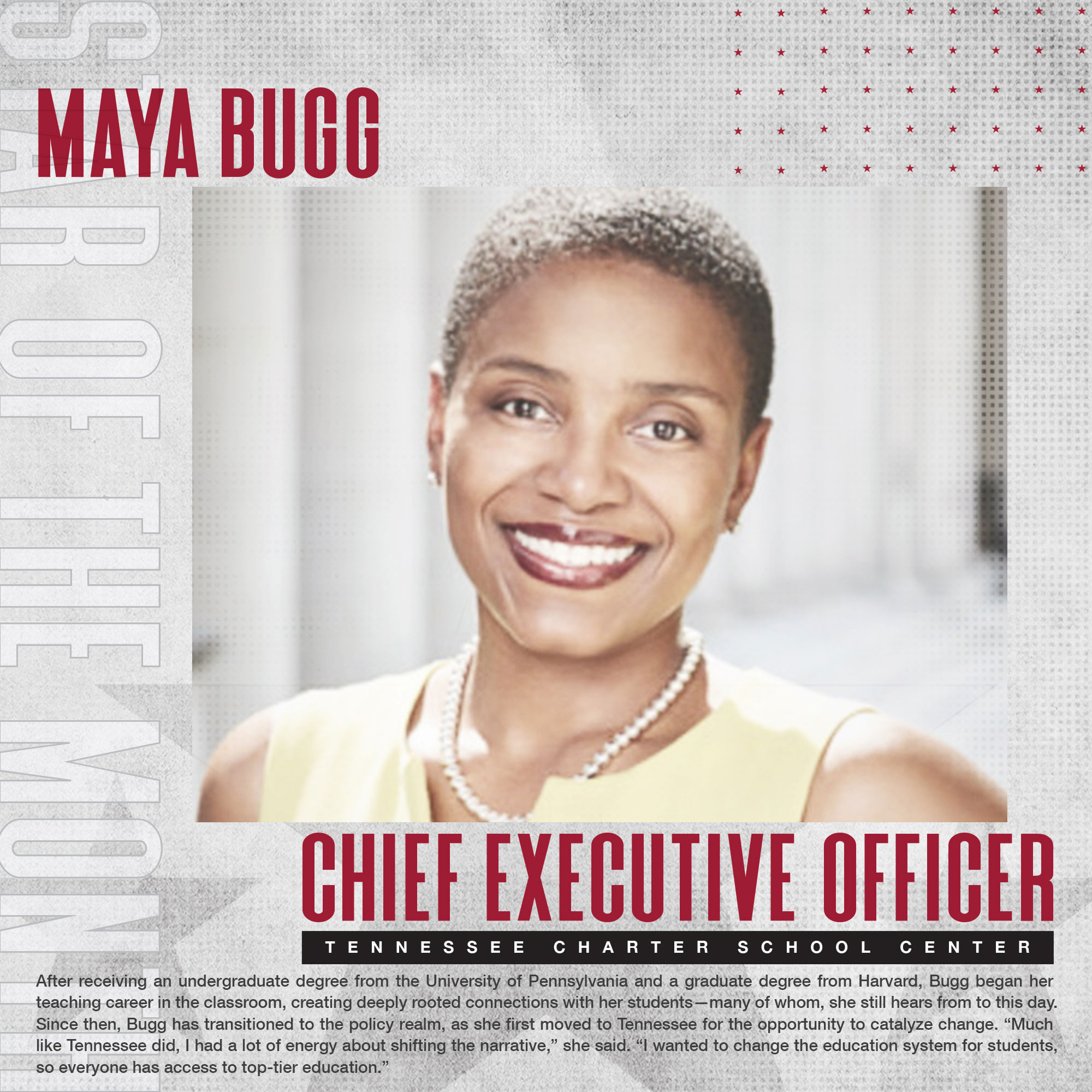 Music City Baseball is proud to honor Dr. Maya Bugg, the CEO of Tennessee Charter School Center, as our November Star of the Month. Bugg has dedicated herself to education—both in the classroom and from a policy standpoint—throughout her outstanding career. She continues to battle racial inequities in the education system, working tirelessly to ensure that all students have access to the opportunities, privileges and benefits of a top-tier education.

Growing up in Philadelphia, Bugg, a straight-A student, always had big plans. But teaching wasn’t always included in those plans, she recalls. At least, not until her teenage years, when she got her first job.

“I was originally going to become a doctor or a lawyer,” she said. “Because that’s what black kids who got good grades are told to do.”

When she started her first job teaching at a local library, she found a problem. “Tutoring kids on the new internet,” she chuckles, “and teaching elderly people about the world wide web”—she began to recognize a significant problem.

“In my tutoring and in my work there,” she said, “I got to see a pretty massive discrepancy between their education at their school and the education I was receiving at my school.”

Bugg recognized that at her school, Masterman—a “magnet school,” she describes it, and one of the more highly-regarded schools in the tri-state area—simply set higher expectations for students. She could literally walk from her school to the library at which she worked, only to bear witness to a new world; one in which people are not held to the same standards; one in which third and fourth graders frequently struggled to read the instructions on the computer screen.

“The instructions could say, ‘press enter to start.’ And some of them couldn’t read it,” she recalled.

“To me, that just did not sit well. That was just not okay. So, I decided to shift gears.”

Bugg did just that. She shifted gears, moved on from her previous desire to become a doctor, and began to dream about a career in education.

Her career in education took off from there—fittingly, it began with an undergraduate degree from the University of Pennsylvania, where she majored in African American Studies, English, and Latino American Studies, with a minor concentration in education. Then, she enrolled in a teacher education program at Harvard University, before beginning her teaching career in the classroom. Throughout her first teaching experience, Bugg says she was focused on creating deeply rooted connections with her students—many of whom, she still hears from to this day.

Since then, Bugg’s career saw her transitioned to the policy realm, as she first moved to Tennessee for the opportunity to catalyze change.

“Much like Tennessee did, I had a lot of energy about shifting the narrative,” she said. “I wanted to change the education system for students, so everyone has access to top-tier education.”

A native of Philadelphia, Bugg grew up going to Philadelphia Phillies games. After taking her twins to a Nashville Sounds game last spring, she hopes that an MLB team in Nashville would bring the same “local feel.”

“Oh, we had such a blast. We just had a great time. They had putt-putt golf, they had snacks, they had lots of activities and I’m hopeful that the MLB comes that way they’ll mimic that local feel that the Nashville Sounds had. It was super, super sweet, and you did not have to know anything about baseball to enjoy it, so I’m hopeful that’s the vibe the MLB will have too.”

July 3, 2020
SUBSCRIBE FOR YOUR CHANCE TO WIN A COMMEMORATIVE BASEBALL BAT