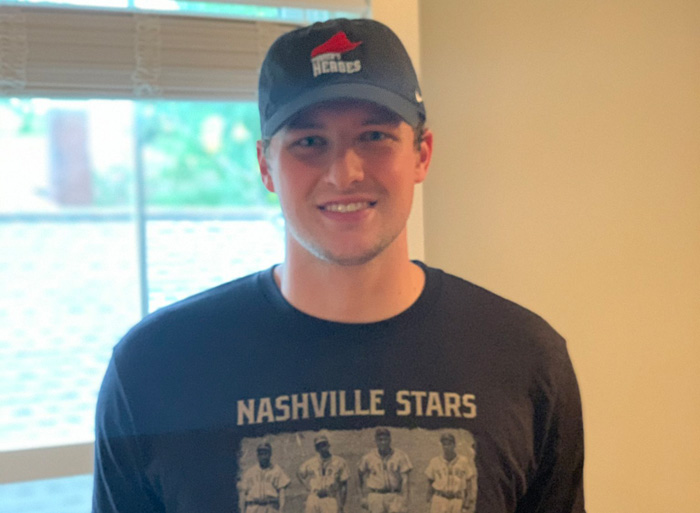 Music City Baseball is proud to highlight Cody Markel, a graduate of Vanderbilt’s Class of 2020, for his extraordinary leadership and dedication to community service.

Markel, a double major in Political Science and Medicine, Health and Society (MHS), was a four-year letterman for Vanderbilt’s football team. As a tight end, Markel grew extremely close with Turner Cockrell, a fellow tight end, teammate and classmate.

“We hit it off right from the start,” Markel said of his friendship with Cockrell. “You can come in combative with those who you compete for playing time with, but that was not what we did. We developed a really close friendship, one that kept evolving until we became roommates going into our junior year.”

But as Markel and Cockrell’s friendship grew stronger, Cockrell’s health deteriorated—after identifying a few lumps on his neck, Cockrell received medical examination only to learn that they were cancerous. His road to recovery, which included radiation, was a strenuous, exhausting process.

“But he still made time for us, even with everything that was going on,” Markel recalled. “That’s just who he was. Our friend group still went to the Chili’s on West End weekly, and Turner was always just so excited for us to come back from school or from practice so he could crack some jokes and talk about our day.”

Turner would eventually receive the “all clear,” as the radiation was deemed successful in shrinking the tumors.

“That was a great feeling,” Markel said. “It’s hard to describe. We all celebrated by destroying his radiation mask in our room, and he was clear for about three months. Then came the worst moment I can remember, when he got another scan and it showed that it had spread throughout his lungs and throughout much of his body. It quickly dawned on us what this all meant.”

Cockrell was enrolled into an experimental trial in the Anderson Cancer Center in Houston. He began chemotherapy, just as the team began preseason practice. Eventually, in September of 2018, Cockrell went home to be with his family.

“His body shut down pretty fast after that. As many people know, he ended up passing away in November of 2018,” Markel said.

In December of 2018, when the Vanderbilt Commodores were invited to play Baylor the Texas Bowl, Markel and his friends took it upon themselves to learn more about Cockrell’s condition. They went to the Anderson Medical Center, where Turner received treatment, and met with his oncologist and surgeon.

“That was something that was really meaningful for us and really meaningful to me,” Markel said. “To hear how she talked about the patients she serves there was super inspirational, and we got to drop off some Vanderbilt goodies to the pediatric cancer patients who were stationed there.”

Bonding with children who were fighting as Turner struck a chord with Markel. In fact, Markel realized that more could be done.

“I just kept thinking to myself, ‘How can I help these kids? How can I make sure we don’t ever have to lose another 21-year-old to cancer again?’”

After seven months of meticulous planning, Markel’s proposal came to life with the formation of Turner’s Heroes. Turner’s Heroes is a nonprofit organization dedicated to raising funds for pediatric cancer research; in truth, the fundraising is only half the story.

“Turner loved superheroes. He loved the comics, the movies, the shows, everything. We named it Turner’s Heroes in honor of Turner, who not only loved superheroes, but was a hero to many of us in his fight with cancer.”

The organization, according to Markel, has three pillars: fundraising for pediatric cancer research, providing patients at children’s hospitals with entertainment through superhero-themed events, and to developing external events—superhero-themed, of course—for the patients and their communities. In the months since its creation, Markel and the Vanderbilt football team have taken multiple trips to the Monroe Carrell Children’s Hospital, where they design capes with the pediatric cancer patients and bond with them.

“We design capes for the kids, we bring foam letters so they can write out their names, we bring felt of superhero logos to add—we play with them and capes that they can keep in the end. Because those kids are the real superheroes.”

Markel has done an excellent job of raising funds, awareness and holding events for pediatric cancer patients, and we are thrilled to showcase his story at Music City Baseball.

August 3, 2020
SUBSCRIBE FOR YOUR CHANCE TO WIN A COMMEMORATIVE BASEBALL BAT