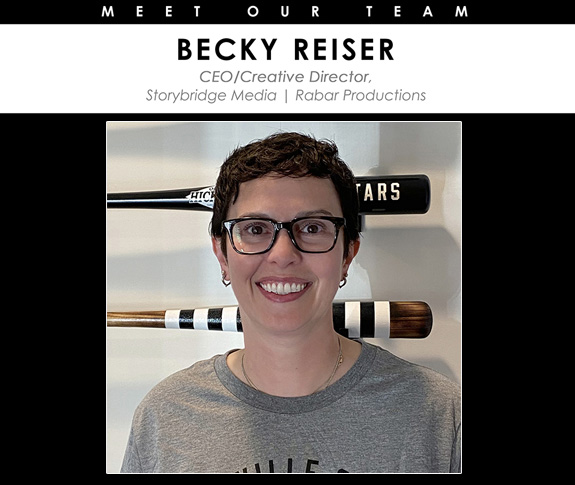 Upon graduation from LSU in the early 2000s, Reiser set her sights on working in the music industry as Art Director for a record label. Reiser landed design internships in New York City, including a summer internship at a record label. After moving to Nashville for a design firm role, Reiser found time to pursue the dream of starting her own company. From there, the designer taught herself video skills, remaining on her own until 2011 when Reiser secured a full-time Art Director position for Big Machine Records that spanned 6.5 years.

Today, Reiser is doing “her own thing” and doing it the way she wants. Throughout her multifaceted career path, Reiser feels she has gotten “a lot of experience on how to do business, and how not to do business,” giving her a leg up in treating clients the way she thinks they should be treated. “I feel like I’m more equipped now than ever.”

As far as the Creative Director’s role in the community, Reiser is a master storyteller. “Everyone and everything has a story. Stories are ultimately what connect us. I wanted to tell stories through my work by visually representing the brand’s message and presenting it to the audience, whether it’s through social media, video, design, or even in a photoshoot. The question is: How do you get that message out to the audience? So, Storybridge Media and Rabar Productions are doing just that…using stories to build bridges, connecting with stories,” said Reiser.

The impact left by Reiser’s storytelling skills within the community is significant. “Part of my background is in nonprofit work, where storytelling and connecting with an audience is crucial,” Reiser says. “Every nonprofit has an important, life-changing mission that needs to be communicated well. I learned to listen to my clients, connect with them on a human level, and then visually communicate those stories in a way that connects with the audience. This way of approaching a project, job, whatever you want to call it, has become a part of me personally. It’s just the way that I work, and now it’s the way that I do business. Stories connect people. They build relationships, and ultimately, they build community.”

Reiser believes storytelling is critical in connecting the community through Nashville’s rich baseball history. “I think that, whether it’s people, an organization that has a mission, or an organization like the Nashville Stars/Music City Baseball, I think that all of those stories need to be told because they’re ultimately going to bring the communities together,” she said.

The designer is honored to be able to work with the Music City Baseball group, because “it’s an opportunity to do something that you rarely get to do. There is an incredible story – and many incredible stories in every player who played,” Reiser shared. “Those need to be told. Everyone knows about Jackie Robinson, but there were so many players that did so much for the sport, for all sports and for racial equality.”

The artist noted the importance of the current Nashville Stars efforts because of what’s been happening in the country. “It is so important for people to understand the place that the Negro Leagues had in the sport of baseball,” she stated. “They played for the love of the game. They weren’t getting anything out of it, they just played. The Negro Leagues story has never been told on a large scale. Telling that through a Major League team would be incredible.”

Reiser’s love of bringing stories to life is nothing short of inspiring. Although she recognizes the incredible sports opportunities alive in today’s Nashville, she feels the city is in need of a sporting atmosphere catered more to families. “Baseball is a family sport. Being a mom myself, I would love to be able to take my son to the ballpark and cheer for our home team,” said Reiser.

“Everybody I’ve talked to, when I tell them about this, they get it. We need to connect with the community, and I truly believe that people will get excited about having this team in Nashville. Most people don’t know about this huge part of American history. It’s not just about the sport of baseball. It’s about the meaning behind this organization and the team,” said Reiser. “There’s a story to be told. Once you know it, you immediately connect with it. That is what gets me excited.”

The Music City Baseball team is beyond grateful for the critical role Becky Reiser plays in continuing to help us tell the Nashville Stars story.