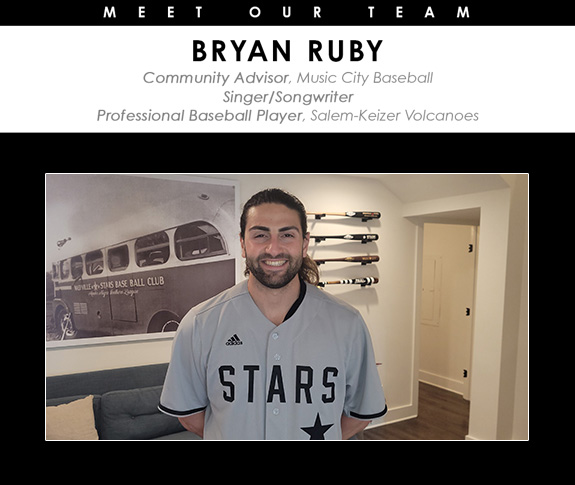 “I’ve always been a baseball guy,” said Ruby, who is currently a member of the Salem-Keizer Volcanoes. The 26-year-old is the newest Community Advisor for Music City Baseball.

Ruby picked up the sport at age six and continued through college, where he played in six different countries overseas and 19 states throughout the U.S. Originally from Pennsylvania, Ruby moved to Nashville three years ago during the offseason to pursue a music career. He now claims Nashville as his adopted home and is rooting for the city’s MLB efforts to come to fruition.

“It just seems like a no brainer that Nashville should have an MLB team. I want to live here for the rest of my life, so that’s something I want to get behind.”

Last year, Ruby made the decision to come out to his teammates and the baseball community.

“I was definitely very nervous to come out. No doubt about it, looking around the baseball world and not seeing other people like me was scary,” said Ruby. “I didn’t have a hero growing up actively playing Major League Baseball that was living out and proud, like me. I was worried. I thought, there’s a 50/50 shot I would get up to bat and get hit in the face with a 93 MPH fastball…Obviously, there are LGBT people in all walks of life – why not baseball? I guess nobody was speaking up about it. But, at the same time, I was told if I ever came out, I’d lose my roster spot and never be able to get a job in baseball.’

Once his story became public, Ruby was encouraged by the show of support from teammates and fans.

“It was crazy – I did one interview about this, and the next day I was on the cover of USA Today’s sports section,” said Ruby. “The reception was super positive. People in the stands waved a little rainbow flag and my teammates told me very clearly that they have my back. It just shows that different people can coexist in our sport.”

An impactful memory that stood out to Ruby was an exchange with an opposing pitcher who tipped his cap toward him ‘Derek Jeter style’ after he got a hit.

“Out of all the things – the articles, the media, the opportunity to now become a community advocate in the baseball world – the most meaningful thing for me was to get that peer-to-peer recognition and respect on the field. Then we went back to playing, business as usual. I got the chills because it was like, ‘Okay, now I can just play ball like I always wanted to.’”

Ruby also shared his excitement to represent the Nashville Stars as a Community Advisor and plans to foster connections between the LGBT Chamber of Commerce and his nonprofit called “Proud to Be in Baseball.”

“It’s showing that representation and being an advocate. Nashville is a growing city and a diverse city. What better way to catalyze interests than to show that – especially with the name of the team, and the history behind that – this could be a team for/that all kinds of people can get behind.”

Proud to be in Baseball offers the baseball community a space for support and empowerment. Ruby and his co-founders have been contacted by all types of people working in the baseball industry, including players, coaches, people in management, and athletic trainers.

“Accidental activist is how I describe it. I’ve co-founded it with two other baseball players who messaged me after I told my story. We joke about it really starting as a website, and over the course of the last six months we’ve evolved into an actual support network for LGBTQ+ people in baseball,” said Ruby. “About 16 million people play baseball in America. Statistically, there could be a number of those people who have always been [in the closet] because of the environment in baseball. That’s what we’re trying to do – make the environment a little bit better for everybody.”

While he’s been active with his organization and baseball, Ruby is taking a new step in his music career. He has a new country music single called “Left Field,” which premiered over the weekend on Sirius XM Country Pride Radio and will be available via streaming platforms on June 8. Ruby has a month full of shows ahead starting with CMA Fest to promote his first single as an artist.

“It’s a feel good, baseball country-type song,” said Ruby. “The song itself is not at all about baseball. It’s the song that I wish I could have heard as a kid, but I never had. You know, all the best things come out of left field. ‘Be who you are, do what you can’ – and it all ties back to our charity because I’ve dedicated 100% of the song’s proceeds to benefit the young kids in baseball that we support at Proud to be in Baseball.”