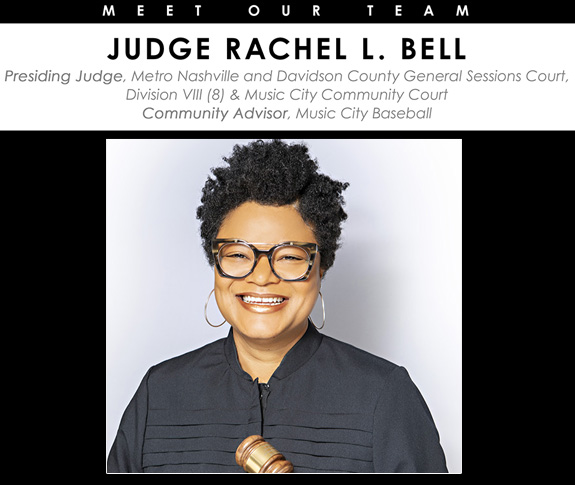 Home is where the heart is, and Judge Rachel L. Bell’s inherent passion for the Nashville community has roots dating back four generations.

A third generation native Nashvillian, her great-grandparents moved to Music City in their early twenties. Judge Bell’s family has a strong connection to Metro Nashville Public Schools, with many family members, including her mother, having worked as principals, administrators, and teachers.

As the youngest judge elected in Davidson County [in 2012], Bell feels she brings a unique and important perspective to the table. Ten years later, Bell is paving the way for diverse voices in community leadership positions.

Judge Bell’s role in the community is one that reflects the viewpoints and values of her constituents.

“It’s important that when I’m sitting there, the values that are reflected in my community are what I speak about and what I share. This is what my community would like to see,” said Bell.

“My voice is important because we come from all walks of life. Being a young African American leader here in our city, it’s important that we all have a seat at the table,” said Bell. “Shirley Chisholm said if they don’t give you a seat at the table, bring your own. I appreciate the level of responsibility that I’ve been given here in the city, not just sitting there and listening, but also using my voice from what I’ve heard in my community.”

The judge relies on her community to speak up and get involved in the conversation surrounding community-oriented organizations and projects.

“There are a lot of opportunities, if we show up. I want to be a person who has a seat at the table before things are finalized, who is part of the conversation. Then I want to set up meetings around our community so we can all share and hear from each other,” said Bell. “What I think and what other people in leadership think is not important if we don’t listen to our community and then try to put what they want into plans.”

Growing up in both a white and a black community, Bell recognizes what it means to be self-aware and the importance of growing up in a very diverse situation.

“We can listen to each other from each other’s experiences and each other’s backgrounds. And I think self-aware people are the people whom we need to have at the table willing to listen to others,” said Bell.

On the topic of an MLB initiative in her family’s longstanding hometown, Bell got nostalgic. Watching baseball alongside her grandmother was Bell’s first introduction to sports.

Bell shared that her grandmother loved baseball because it “was one of the first sports they saw on TV where Black men had an opportunity to play,” Bell said. “So that was a fun space for me as a child, to watch baseball with my grandmother. We would watch the New York Mets.”

Baseball was Bell’s first love, igniting her passion for sports, which eventually led to a career playing basketball at Auburn University. Some of Bell’s fondest memories from her law school days in Memphis include sitting at the ballgame on a Sunday with her books, soda, and a hot dog.

“It’s such a peaceful, peaceful place. It’s a sport that you can just relax and enjoy. You can’t rush a baseball game,” she said. “And I love that about it too, that this enjoyment will last about three hours instead of a real quick, in-and-out sport.

“I think Nashville has such a great opportunity for all different types of new sports,” said Bell. “We just got a soccer team, we’ve got a hockey team and a football team, we’re talking about getting a WNBA team. Why wouldn’t we have a major league team?”