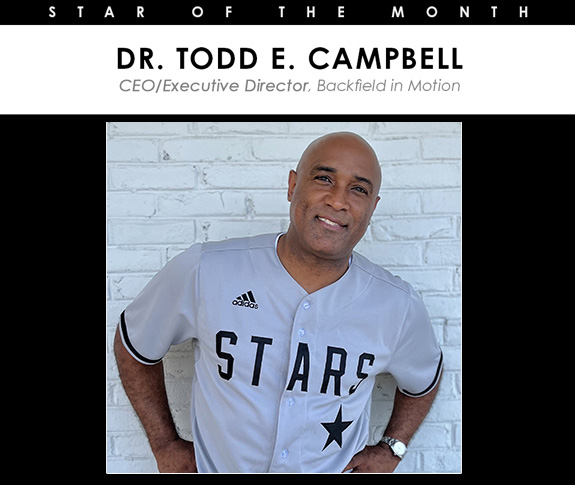 What would the world look like if every student had someone cheering them on and pushing them to be the best that they could be? That vision is what Dr. Todd E. Campbell, and his team at Backfield in Motion want to help create in Nashville.

Backfield in Motion is a non-profit organization that focuses on education through mastery of literacy and numeracy skills for at-risk youth. The program helps prepare students with skills that lead to a high school diploma, a foundation for higher education, and a future career with on-the-job skills needed to enter the world of work.

“The program started 20 years ago as a football league,” said Campbell, who serves as the CEO. “A very wealthy guy from Nashville, who worked at a private school on the East side, was coming and he was bringing [kids] over there. Eventually, he saw that they needed something more, so he started a football league for them to play in on Saturdays, but before they could play, they had to attend a study hall Saturday morning. After a while, that morphed into a tutoring program and then we really expanded the academic part so that morphed again into what we are today.”

Campbell, a retired school principal, joined Backfield in Motion in 2016 after the previous CEO retired. As the program evolved, it has not lost touch with its roots and still uses sports as a way to get kids involved and as an incentive for academic achievement.

“When the previous CEO retired, they felt like they needed someone who had a different background to fit the program and what it is now,” said Campbell. “I have a doctorate in education and played football in high school, so my background allows me to really understand both sides. I tell the kids you can’t play sports forever and that academics are just as important. We try to put guys in front of them who were successful in college and whatever league they are in now so they can see that.”

Through the support of sponsorships and fundraisers, BIM has made their program as accessible to as many kids as possible by eliminating membership costs. It is completely free for any student who wishes to join but in return, parents and youth must commit to regular attendance through at least one semester.

“It’s a commitment, kids have to stay the whole program, all 3 hours. We feed them a hot meal, they have academic tutoring or help, and then in the last hour, they play ball or whatever sport we have going on during that time. If they get in trouble at school, they can’t play and if they get suspended, they come to our office during the day.”