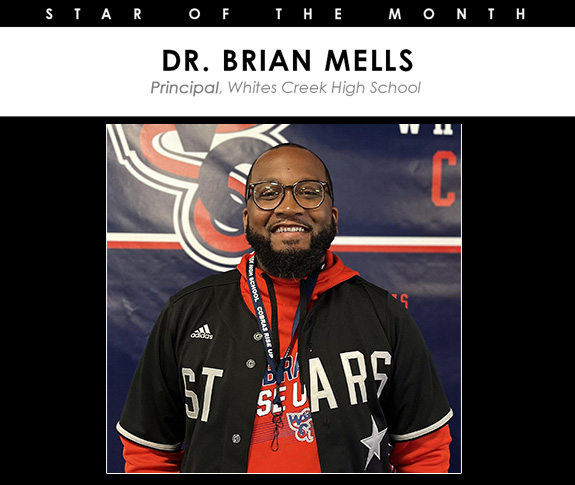 Dr. Brian Mells knows what the impact of education can be for young people, and oftentimes, the availability of having opportunities can drastically change how they shape their futures.

Dr. Mells has been working in the Metro Nashville school district for 17 years. After graduating from the University of Tennessee with a degree in mathematics in 2006, he began working as a math teacher at Hillwood High School. Since then, he’s quickly moved up the ladder and has found his home at Whites Creek, where he has been serving as the principal for three years

“I always wanted to be a principal eventually,” he said. “I just didn’t think it would happen so fast.

Last Fall, the school entered a formal agreement with Nashville State to bring these impactful educational opportunities to students. The Early College program came out of the Metro Schools “re-imagine” initiative and is supported by a $300,000 grant Nashville State received from the PNC Foundation as part of PNC’s efforts to support Black Americans and low-income communities.

With less than 30% of their students going on to enroll in postsecondary institutions after high school, according to state data, Mells said the program will help build a “college-going culture.” Beginning as freshmen, students will be provided with mentorships and workshops that help build skills such as financial literacy and independence to set them up for success after high school. At the end of their high school career, students will graduate with both a high school diploma and an associates degree, putting them two years ahead of other college-bound seniors.

As one of only two programs of its kind in the area, the early college program is changing the game for students and providing a unique opportunity for them to take charge of their education. Mells said of the two schools that have implemented the program, Whites Creek is the only zoned school, meaning it’s open to all the students whose addresses are assigned to attend the school.

“I’ve seen tremendous changes in our students’ attitudes about starting college. They’re excited about taking these college courses and being challenged, it’s a lot of work but they’re running with it,” said Mells.

As his students’ champion and a strong advocate for higher education, when plans for a partnership between the school and Nashville State were announced, Mells was all for it.

“I tell students all the time, the likelihood of you graduating on time is dependent on being connected to something at your school, whether that be a club, academics, or sports, ” he said

As a former baseball coach, he’s ecstatic to have an MLB team here, both for him to watch and to represent the endless opportunities he wants his students to have

“I think having a team here would make a huge impact in our community. I think we’ll see more opportunities for jobs, for revenue, taxes and things that can provide more funds back to schools to be able to do more things for students and not be limited,” he said.