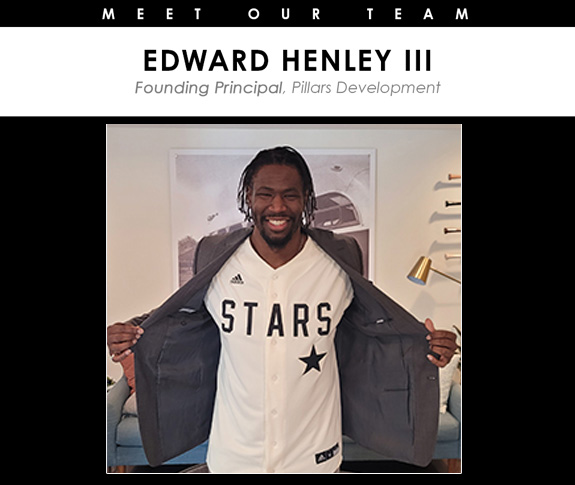 As the Stars’ effort continues to make headway in Nashville, we’re looking for a place to call “home.” The Founding Principal of Pillars Development, Edward Henley III, is working hard to help turn the facility of our dreams into reality.

Henley, who was born and raised in North Nashville, has been a Stars fan from the start and is serving as the owner representative and project manager for Music City Baseball. He says he is focused on taking a thoughtful, reasonable, and appropriate approach to the construction associated with the Stars and the community in which he grew up in, which makes him the perfect fit for our team.

“I had a lot of excitement about the Stars and what they’re doing even before I stepped into my role because I had been following along with the effort. Now, being able to join the mission with Music City Baseball puts me in a position where I can help fulfill this vision,” said Henley.

Bringing minority ownership and representation into Major League Baseball is an essential aspect of our mission, which hits close to home for Henley. He shares a commitment to building a facility that serves the community around where it is built.

“Having a focus of including and honoring people of color, specifically Black people, and still being aware of the current economic state of people in North Nashville just seemed like it was checking all my boxes and aligning so well. I feel a great deal of responsibility and commitment because I know how important it is,” he said.

Since graduating from the University of Tennessee in 2011 and returning to Nashville to work as part of the project management team on the Music City Center, Henley has worked on several other community-centered projects for the city and state as well as founded his own minority-owned firm.

“My dream has always been to run a sports team,” he said, “but when I got to college, I ended up going to school for business.”

Though Henley said he always knew he wanted to be his own boss and operate in the space he’s in, originally he thought he would work in the field for some time before eventually going off and starting his own firm. When things started heading in another direction, Henley said his journey to doing so didn’t go exactly how he’d imagined.

“Fortunately, I was able to reenter the construction and real estate space upon graduating. At first, I was just working on the Music City project, and then I got into property management,” he said. “When Nashville caught fire, all my clients started selling their properties shortly after I started my firm, Pillars Development, in 2013.”

Founded on the approach of a strong level of curiosity, creativity, and community, Pillars was created to assist in the creation of thoughtful places that are dedicated to providing economic, educational, and recreational improvement to the local community.

“I wanted to take all the things that I had learned, all of the access and knowledge that I had gained as well as the network I had, to bring economic development and vitality to smaller, inner-city communities that usually don’t have projects of that scale but definitely deserve projects of that quality,” Henley stated.

Growing up, Henley said he has fond memories of baseball being his first sport, but a lack of engagement and access around it at the time eventually caused him to move on to other activities like basketball and football. The prospect of a facility being built in North Nashville could change the tide for kids like him and present new opportunities for youth and community engagement in the area.

“You didn’t really see baseball fields in our area or a lot of people that looked like us playing,” said Henley. “I can only imagine what the opportunity to go see a Stars game could do. Not only seeing people who look like you playing, but being able to see people that look like you say, ‘I’m part of the reason that’s here.’  The ownership structure gives the opportunity for a lot of local buy-in, with people being able to say that somebody they know is an owner of that team. Those are things that we just didn’t really fathom growing up. I think this is a way to push a lot of new opportunities and take a huge, light-year step forward in that regard.”

Henley will also tap into experiences he has gained from similar projects to ensure a diverse set of businesses are represented in the overall development.

“These projects have a very specific focus on inclusion during the construction to make sure that there are opportunities for businesses that are owned by women, people of color, veterans, and all kinds of local businesses,” said Henley. “Nashville is booming. The growth is insane here, and there’s a lot of opportunities. By making a concerted effort to deliver those types of benefits and opportunities, we get something that you don’t typically get when you’re just building an office tower.”

As the Stars look at a potential stadium location at Tennessee State University, it’s important to him that the community is involved and understands the goals and intentions of the project at all points of its construction.

“The intention and communication are really an essential part of it,” said Henley. “It’s important to make sure that people understand what we’re doing and to allow people to voice their concerns. We will address those concerns and double down on a commitment to do it the right way so it can benefit TSU and the entire community.”