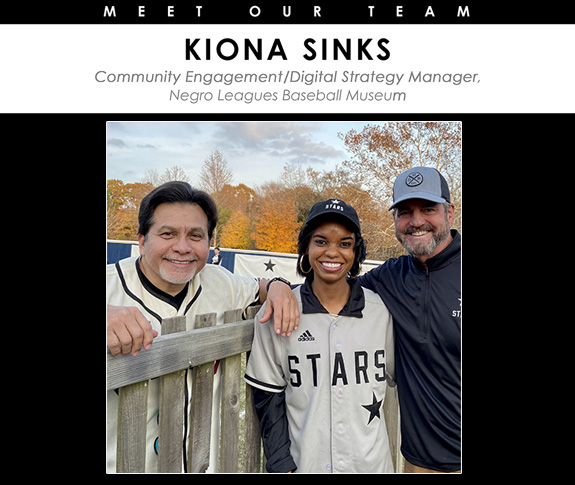 Kiona Sinks embodies so much more than her title of Community Engagement/Digital Strategy Manager for the Negro Leagues Baseball Museum (NLBM). Sinks, a driven and accomplished young professional, ran track collegiately and was the first in her extended family to attend college. Originally from Jonesboro, Arkansas, Sinks moved to Missouri at age 12 and later attended Central Methodist University in the small city of Fayette.

Sinks exudes passion in everything she touches and her desire to better our community is palpable. During a challenging time for Black Americans, Sinks stepped up to the plate at a predominantly white institution to help give current and future students a sense of belonging.

After founding her college’s first African American Student Union as a sophomore, Sinks felt the immediate impact of her hard work.

“Being immersed in the story, it has allowed me to really see—what I call cultural etiquette—how do we advance cultural causes? For me, that has really been the catalyst for where I am today.”

The initiative soon became much bigger than herself.

“In a way, it had to be successful, because if it wasn’t successful, it would have failed, and then what opportunities would have been ahead for minorities after me,” said Sinks. “When you’re the first to do something, you know it’s never easy, you know you’re taking a risk. You’re breaking systemic cycles that people don’t want to address.”

Sinks made the Kansas City connection when she moved there while pursuing her undergraduate degree. As she puts it, “you can’t be here and not run into a place called the Negro Leagues Baseball Museum,” which led to the marriage of Sinks’s passion for activism with the historic legacy of the NLBM.

While collecting volunteer hours for her graduate scholarship, Sinks ignited her relationship with the Negro Leagues Baseball Museum.

“I think the museum cultivated my love for Kansas City, and what it truly meant to be Black at that time here, and to see where the institution is today has been pretty incredible,” said Sinks.

For her, part of the museum’s importance lies in the significance of what Black history means, beyond the walls of a single month of celebration.

“Here at the Negro Leagues Baseball Museum, you see the best parts of what Black men and women contributed to our country. You know what the Negro Leagues represented around our country, creating opportunities when opportunities weren’t afforded to these athletes at a time when they were naturally excluded from a lot of the joys of America’s pastime.”

The partnership forged between the Negro Leagues Baseball Museum and the Nashville Stars is both an honor and a privilege, as the NLBM is selective in who they choose to represent.

Sinks is working to fill in the missing pieces of the Nashville Stars story where segregation created gaps.

“How do we continue to tell the story of the Nashville Stars? You start thinking about segregation, [you] can’t find anything about the Stars, and how they just weren’t covered a lot around the country when they were barnstorming and playing.”

As far as her individual goals, Sinks continues her support from a community partnership perspective, helping people understand on a national level why this effort is important—not just to the museum, but its importance to the game of baseball.

“This effort is bigger than just ‘let’s bring MLB to Nashville.’ The opportunities we have to cultivate for future generations to ensure that people have the opportunity to play, which is what the Negro Leagues represented—they represented opportunities,” said Sinks.

Sinks traveled to Music City several months ago and observed a community that wants something to rally around.