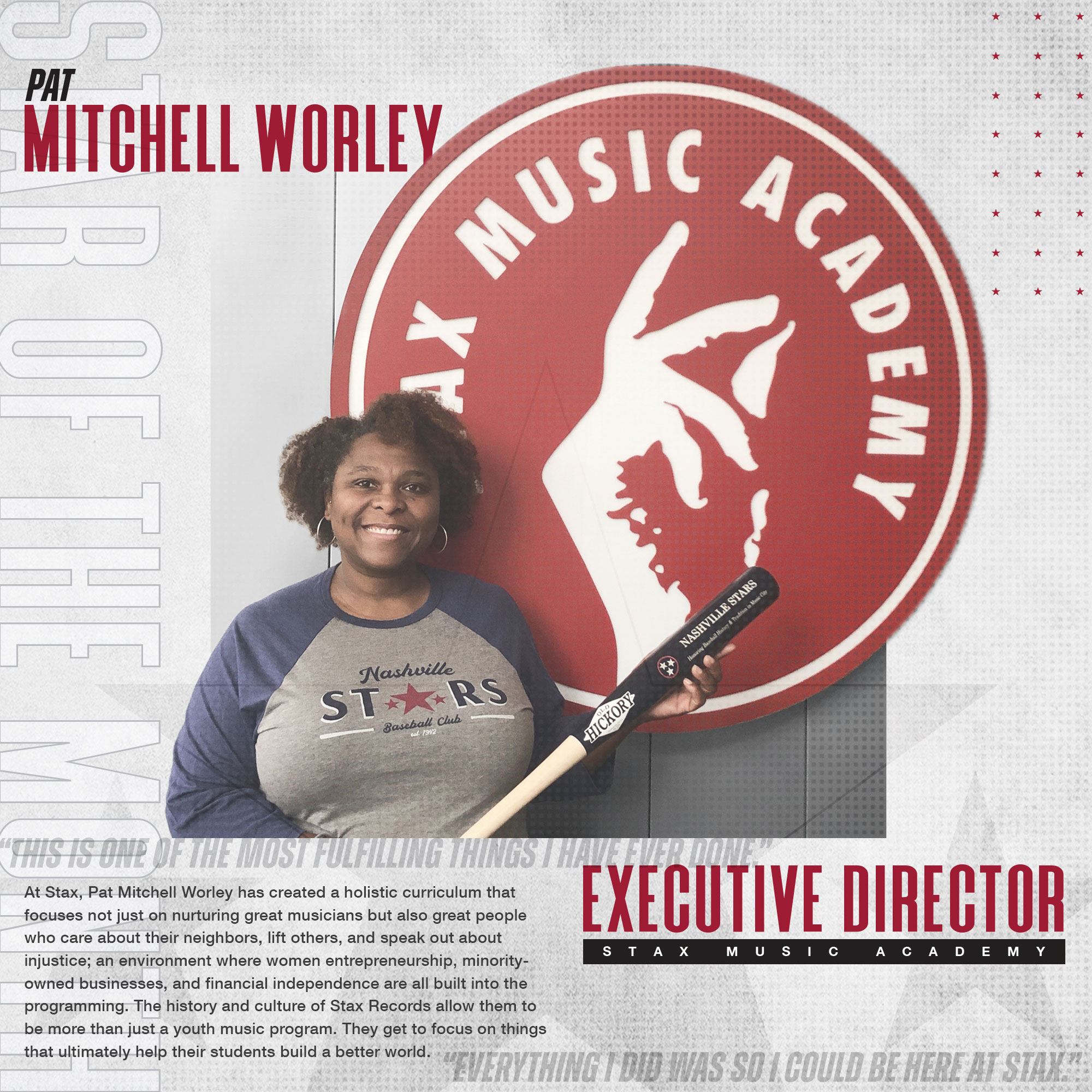 If you would have told Pat Mitchell Worley 20 years ago, that today she would be almost two years into an Executive Director role at Stax Music Academy, she says she would have laughed at you. If you ask her today, she will tell you, “This is one of the most fulfilling things I have ever done.” After a successful career in commercial radio, music journalism and PR, she began working with several non-profits doing fundraising and development. Viewing each position she held along the way as a new and exciting opportunity to learn, she can now look back and say, “Everything I did was so I could be here at Stax.”

The culture at Stax Music Academy is centered around the culture and history of the legendary, Memphis-based record label Stax Records. It was not just a record label; it was a family that was very involved in the community as well as the civil rights movement. The programs at Stax are structured to be very intentional about community involvement and engagement, with a focus on how they are helping the music industry and the black community in Memphis. In June of this year, Stax Music Academy celebrated its 20th anniversary.

After spending years in the entertainment industry, Mitchell Worley has developed a unique perspective on music education. Most arts schools focus only on the craft, leaving out the skills necessary to make a living being a great musician. Thankfully, this is beginning to change with Mitchell Worley’s pioneering efforts in composition and songwriting programs, where students learn how to make income from their music. In August of 2019, Levi’s Music Project and Justin Timberlake partnered to create a songwriting lab and masterclass at Stax. Justin even surprised students by spending two days on site doing songwriting and performance workshops.

Most recently Music City Baseball learned of her efforts to allow students to add their voices to the current Civil Rights and Black Lives Matter Movements and knew immediately they wanted to partner with Mitchell Worley and the academy. Stax launched its Juneteenth “Songwriting Showdown” challenge to allow Memphis-area teens a chance to add their voices to the movement for racial equality.

“We are dealing with two life-altering situations right now: being forced to work virtually because of the COVID-19 pandemic and widespread protests against racism in the United States in the wake of the horrific killings of black Americans. It’s our responsibility as music educators to do our best to tackle these issues head on, and we think giving a voice to young aspiring musical artists and writers is one way to help empower a new generation to affect change by using music.” They will have one week to submit their song, with the winner announced on June 30th.

At Stax, Pat Mitchell Worley has created a holistic curriculum that focuses not just on nurturing great musicians but also great people who care about their neighbors, lift others up and speak out about injustice; an environment where women entrepreneurship, minority owned businesses and financial independence are all built into the programming. The history and culture of Stax Records allows them to be more than just a youth music program. They get to focus on things that ultimately help their students build a better world.

October 1, 2020
SUBSCRIBE FOR YOUR CHANCE TO WIN A COMMEMORATIVE BASEBALL BAT