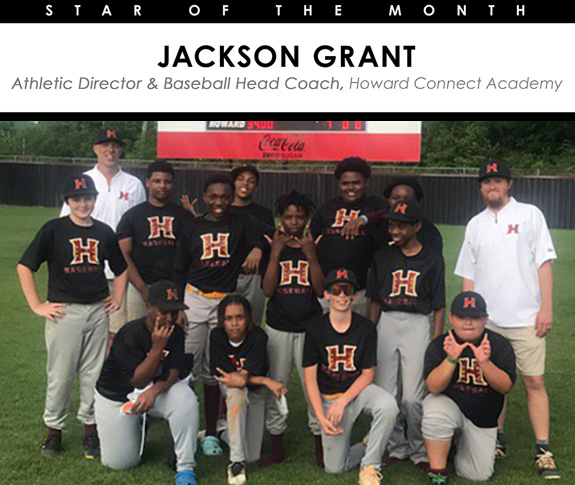 Building something from the ground up isn’t easy. Just ask Jackson Grant.

The athletic director and head coach for Howard Connect Academy’s middle school baseball team arrived at the school in 2021. Grant was tasked with developing a baseball program for the brand-new school in Chattanooga from scratch. With a strapped budget and Covid restrictions, he had to get creative in getting new equipment, turning to social media and an Amazon wish list.

“It was extremely challenging,” said Grant. “We had a ban on most fundraising activities because of Covid, so we were extremely limited on how we could raise funds. So, to be able to have basically one avenue to get revenue, I tried to push it as much as I can.”

Using donations and support from the community, Grant managed to keep his team on the field.

“I didn’t expect it to blow up like it did,” said Grant. “I had multiple organizations reaching out to me. One of the coolest things was that I had coaches from other schools in the district donating their old equipment to us. I just think that goes to show what a community baseball is.”

However, his players learned another life lesson about competing. His team, made up mostly of kids who had never played much organized baseball, played against more experienced teams with years of experience. The team went 0-12 in their first year, and 0-5-1 to start 2022.

“I had one kid last year who had played baseball before on my team, and I had 10 other ones who had never stepped into a batter’s box before,” said Grant.  “Here I am going up against teams and players who have been playing on travel ball teams since they were four. We’re going to be playing teams that have 10 years of experience on us. But, the one thing that I want to be able to say is that we outwork everybody. You know, we might not be more talented. We might not know more baseball, but we will outwork every team that we play.”

In its 19th game in school history, Howard Connect Academy got that elusive first win, a 7-4 victory over Brown.

“Knowing how hard it was last year, seeing how hard my kids worked just to get beat by 10 or 15 runs every game, and then they’re back at practice the next day ready to work hard again, that was inspiring to me,” said Grant. “It was almost like, ‘oh my gosh, we can actually do this.’ It was just this sense of calm that was put over them that, ‘coach was right that if we work hard and we do the things that we’re supposed to do, and we keep trying we keep coming back every day that we can do this.’ The looks on their faces was just something I’ll never forget.”

Now, he wants his players to dream big. He hopes that a Major League Baseball team up the road in Nashville will give them hope for the future. Especially since many of his kids did not think baseball was an option for them a couple of years ago.